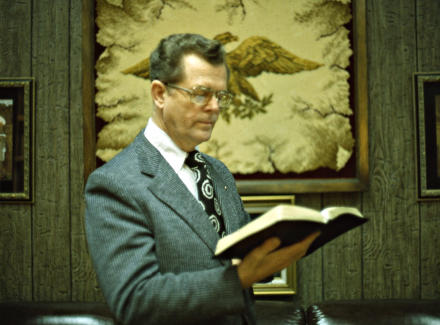 In the summer of 1974, our Founder, Dr. O. Talmadge Spence, was led of the Lord through several passages of Scripture, including the covenant chapter for the ministry found in Isaiah 54, to leave the denominational system and begin the work of what would become known as the Foundations Ministries. The burden was for a non-denominational undergraduate and graduate school for anyone who conscientiously accepted the separatist, fundamentalist teachings of the Gospel of the Lord Jesus Christ. From this unpretentious beginning, the Foundations Church and Schools were born of God for a time such as this. On May 13, 1974, groundbreaking ceremonies took place on twelve acres just off Interstate 95 at Exit 77. 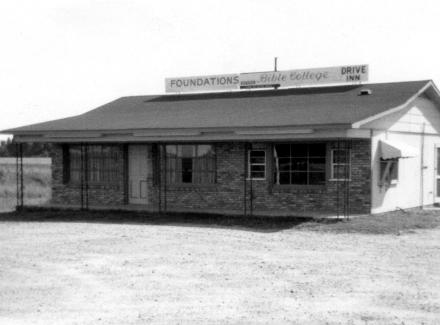 The work commenced on June 2, 1974, with the first services of the Foundations Bible Collegiate Church held in a small café/restaurant at Exit 77 off Interstate 95. During that summer, friends and future faculty undertook the construction of the first buildings: Foundations House (to house the main church sanctuary, classrooms, library, and administrative offices), the dormitories for men and women, and the Dining Common. We continued that summer to use the café for administrative purposes and for holding our first summer school session. The first campus worship service was held in the unfinished Dining Common with thirty-five persons present. Sunday services would continue in the Dining Common while work was being completed on Foundations House.

Although the facilities were not fully completed, Foundations Bible College was formally opened on September 30th of that year. We did not have ceilings and heat in the dorms until the first of January, yet some twenty students were housed there with a consciousness of the keeping power of God. That year was an unusually blessed year when God answered many prayers. Our budget that first year was $28,000; although a small amount compared to the present yearly budget, it seemed every penny was brought in by burdened prayer and faith in God’s promises. 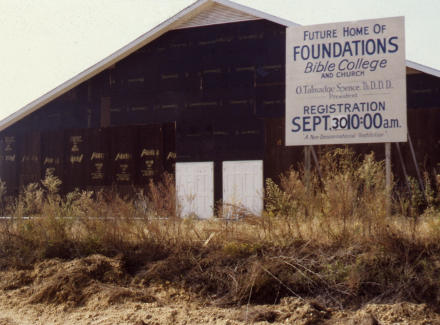 With the beginning of the ministry, the burden of the Word of the Lord sounded forth from the pulpit, the college and night institute classes, the Bible conferences, the Wonderful Word Hour radio program, sacred oratorios, “Formal Foundations” events, the tape ministry, college societies, the outreach ministries, as well as the Straightway and other publications. 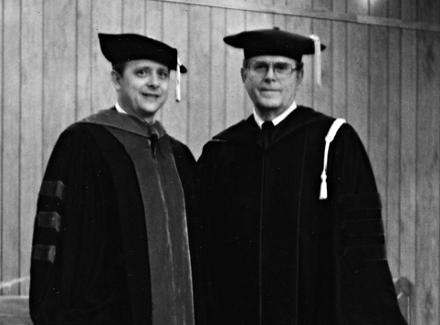 Rev. H. T. Spence was installed as the first vice president of the Foundations Schools on March 28, 1980. Beginning in 1983, he served as the principal of the Academy for nine years. He received the first earned doctoral degree from Foundations Theological Seminary on May 18, 1984.

The groundbreaking for our next building, Praxy House, was held May 18, 1980, and the dedication was on October 3, 1980. Foundations Christian Academy, a “holy experiment,” began September 4, 1980. Classes first met in Canon House on the south campus until Praxy House was opened in the fall of 1981. Canon House was an existing structure on the property when the ministry first began. 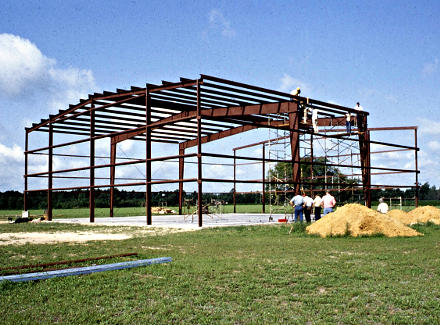 Eventually, Foundations Christian Academy would return to the south campus and find a new home in the fall of 1986 when we renovated an old barn and moved it behind Canon House. The elementary and junior high were housed in this building that would be known as “Chapter House” while the high school met in Canon House.

After the Academy returned to the south campus, the Audio Ministries and Anvil Press were moved upstairs in Praxy House. Praxy House was used for meetings, chapels, and Sunday Bible classes and was also the location of the campus gymnasium.

As young people were being prepared in the classroom, the Foundations Ministries through the Christian Purities Fellowship was supporting missionaries in Germany and South Africa as well as several churches in Virginia, South Carolina, Oklahoma, and California. The CPF continued its hope through the Cassette Bible Study Program, Correspondence, Bible Distribution Overseas, Nursing Home services, publications, and the Wonderful Word Hour.

March 24, 1989 marked the groundbreaking ceremony for the largest building on campus, Anvil House. Due to inclement weather that day, a portion of the ground from the building location was brought inside for the acknowledgment of this new venture. 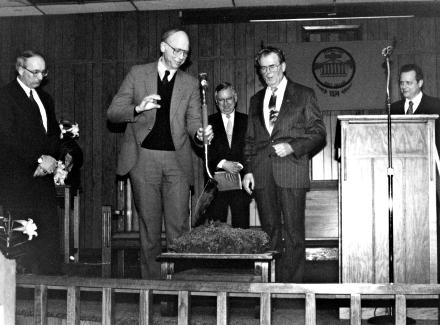 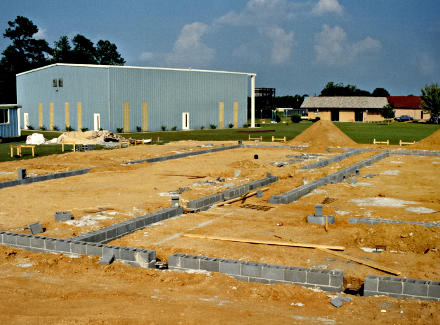 This period of our history saw extensive work on Anvil House. Actual construction began in the fall of 1990 with the pouring of the slab foundation, block work, and steel structure. By the summer of 1991, the exterior stucco was finished. The Calvin Pavilion was completed by November 1993. The rough-in plumbing, HVAC, and most of the electrical were finished by the end of 1994.

Anvil House, the last of the tangible edifices built under the guiding hand of our founder, is a 30,300 square-foot facility housing eight divinity halls and an 800-seat capacity sanctuary for the College Church. It is a learning center dedicated to the presentation of world history, church history, the remnants of history, and biblical history. It includes some 1,600 art pieces from around the world, which are visually used to tell the story of these histories. In a day when the truths of history are being rewritten, our founder had a burden for a facility in which history might be viewed in all the compartments of epistemology. 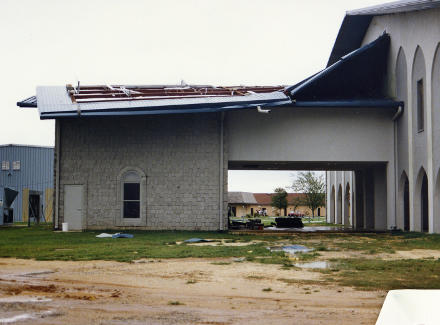 On September 5–6, 1996, eight months before the dedication of Anvil House, Hurricane Fran hit North Carolina causing damage to our campus, including Anvil House. Repairs were made and the work continued. Classes resumed after a short reprieve to clean up the campus.

The Day of Dedication for Anvil House took place on May 15, 1997, and the first graduation three days later on May 18th. After the finishing touches were complete (by 2 PM), the Dedication service began at 3 PM and included prayer, Scripture readings, special music, several acknowledgments, and a congregational reading. Dr. O. Talmadge Spence, the founder, brought the Graduation message on the 18th to conclude the Anvil House dedication week. 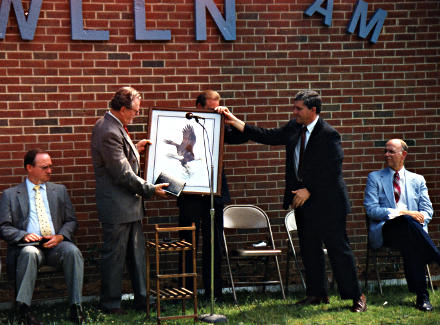 During the decade of the 90s, the ministry would own and operate a local 5,000-watt AM radio station located in Lillington, NC. Radio station WLLN was purchased on February 18, 1991, and began broadcasting on April 23rd of that same year. With some reluctance, but believing it to be in accordance with the Lord’s will, the station was sold in October of 1999.

On August 22, 1999, at the conclusion of the Sunday morning service, Dr. O. Talmadge Spence, the founder and first president of the Foundations Ministries resigned his position as president and became pastor emeritus. Then on September 29, 1999, Dr. H. T. Spence was installed as the second president of the ministry and pastor of the church. 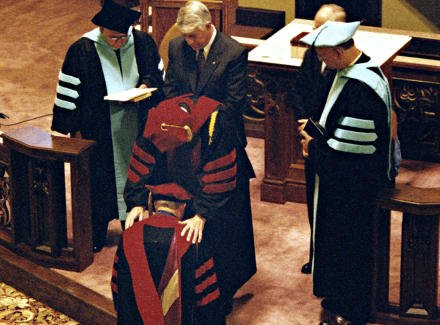 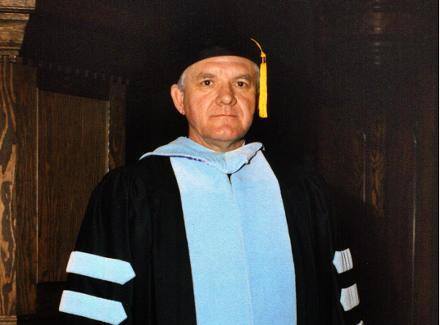 As the ministry transitioned into the twenty-first century, Dr. Dennis Lowry was installed as the second vice president and associate pastor on January 9, 2000.

The year 2000 also marked the home-going of the Founder, Dr. O. Talmadge Spence, who went to be with the Lord on July 17th. The funeral was held on July 22nd with the service concluding at Paracleft, the cemetery located on the campus property. 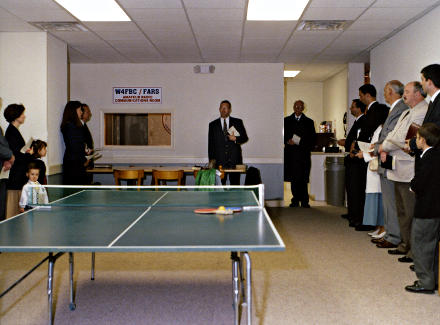 Renovations were made to Praxy House with the downstairs being converted to the new Student Center in September of 2001, and the addition of the FARS room for the Amateur Radio Society, which was dedicated on Good Friday in 2003. In 2002, the building of the manse was completed on campus as the residence for the president of the Foundations Ministries.

Another vision within the Foundations Ministries was birthed during this time and would be called “The Foundations Builders for Christ.” This ministry was started to be an assistance in construction and building for missions around the world.

The Lord opened a new door of opportunity for our radio ministry in 2007. On January 15th of that year we commenced webcasting with FBC Radio to a worldwide audience. It was also in 2007, on October 4th, that the Lord would call home Dr. Joye Spence, the wife of the founder and first Dean of the Fine Arts Department.

Further renovations to Praxy House saw the relocation of Foundations Press to the former Onesimus Room in 2008. 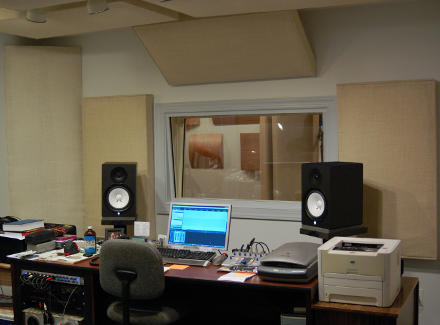 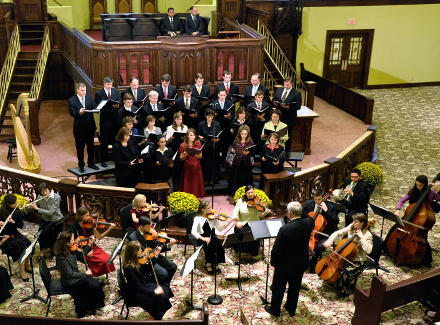 Believing that we are in the end time of the last days, our burden has increased for God’s remnant around the world. On October 3–7, 2012, the first Congress for the Christian Remnant was held on the campus with the hope of encouraging those that are living for Christ and longing for His soon return.

We continue to prepare students to live for and serve Christ in their generation as we further our outreach to the body of Christ and seek to be a witness for Christ’s gospel to a lost world.